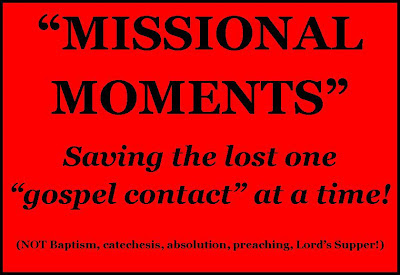 If I had to guess, I'd say that these will be five minute videos or testimonials of some sort, showing how this or that congregation or these or those individuals are "sharing their faith" in some fashion. If I'm right, these videos or testimonials will probably be accompanied by emotionally-manipulative music playing in the background as the convention witnesses how the lost are being reached (have your hankies ready!).

I'm basing this guess on a couple of factors: 1) I have seen this sort of thing personally in the past at my own district conventions. I think they were called "Ablaze!(tm) Moments" or "Great Commission Moments" or "Faith-Sharing Moments" or something like that. They were cheesy and not at all in line with our Lutheran Confession of the faith (of course, saying that these days is seen by many as being akin to kicking puppies, but so be it), but they had just the right amount of emotional manipulation to cast a spell over many in the assembly, leading them to believe that these sorts of "___________ Moments" was what the Church was all about, the real "ministry" and "mission" happening not via the preaching of the pure Gospel and right administration of the Holy Sacraments in the Divine Service, but out there in the world whenever a Christian has a "critical moment" with an unbeliever unchurched person and makes a "gospel contact." 2) The "Guiding Principles" of the MNS District, which sees its mission as "developing missional leaders in congregations and schools" and wants all Christians in their district to see themselves as Missionaries, who "fervently seek opportunities to speak of Jesus with friends and neighbors," and wants congregations in their district to see themselves as "mission outposts." This, of course, comes with all sorts of goal-setting, since it is important to keep track of how well this "everyone a missionary" strategy is working (i.e. how many souls are being saved by the Missionaries - all Christians - in the district). Plus, if all those Missionaries are not being as fervent as they ought, these goals can be referenced to guilt motivate them to get out there with more fervency to reach the lost (after all, as our former synodical president often quipped, "Every time I snap my fingers, someone goes to Hell!"). So, I'm guessing that these "Missional Moments" will be used in the spirit of these Guiding Principles - opportunities to reinforce the idea that everyone is a Missionary and to motivate all to get out there and save the lost, already!

The irony in all of this is that those who follow the "everyone a minister/missionary" philosophy (which comes from decidedly un-Lutheran sources - just sayin') think that, in doing so, they are fulfilling the so-called "Great Commission." Really, though, what they are fulfilling is what I like to call the "Great Omission," since, well, they actually omit the things Jesus Himself says makes disciples in their missional, Jesus-follower-making model. The things that actually make disciples (Baptism, catechesis, absolution, preaching, reception of the Lord's Supper - all under the authority of Jesus in the Church He established and in which He continues to be Present) are secondary to the real "ministry" and "mission," which happens whenever a Christian Missionary confesses the Gospel shares his/her faith with an unbeliever unchurched person out in the world. In the "Great Omission," what is really important are the "gospel contacts" all the Missionaries (all people) make. The real "Gospel Contacts" (Baptism, catechesis, absolution, preaching, reception of the Lord's Supper) are often not even counted in the goals of those who follow the "Great Omission" (e.g. none of these actual "Gospel Contacts" were important enough to be counted in the running tally of soul-saving that used to stain grace our synodical website in the "Ablaze!(tm) Ticker").

But, I know, I'm just a nasty, polarizing "confessional," who doesn't care about saving the lost. If I did, I would jump on board with the program and start teaching the people I am blessed to serve that they are Missionaries, who need to get out there in the world and start saving the lost - pronto! But, alas, I love them too much to burden them with the guilt of allowing so many people go to Hell because of their obvious laziness. Plus, I still hold the crazy belief that saving the lost is something best left to the Holy Spirit, who does that lost-saving work via the means of grace (Holy Word and Sacraments), which He Himself established for this purpose. So, I teach the people I serve to live out their God-given vocations and to always be ready to confess the faith if and when the Holy Spirit presents the opportunity, but to also be comforted by the fact that they are not "missionaries" and that saving the lost is not their job, which, of course, means that neither myself nor the congregation I serve will ever be featured in a district's "Missional Moments" at a convention. Oh well, I suppose I'll have to learn to live with that.

Whatever these "Missional Moments" turn out to be at the upcoming MNS District Convention, I think it is safe to conclude, based on the actions of the MNS BoD toward University Lutheran Chapel, that none of the following pics would be considered by them to be "Missional Moments." On the contrary, what you see depicted in the pics below has to be eliminated so that they can fulfill the "Great Omission" by selling and destroying ULC to make way for students to be raised up as Missionaries, so that more "gospel contacts" can be made and less people will have to go to Hell whenever we snap our fingers. 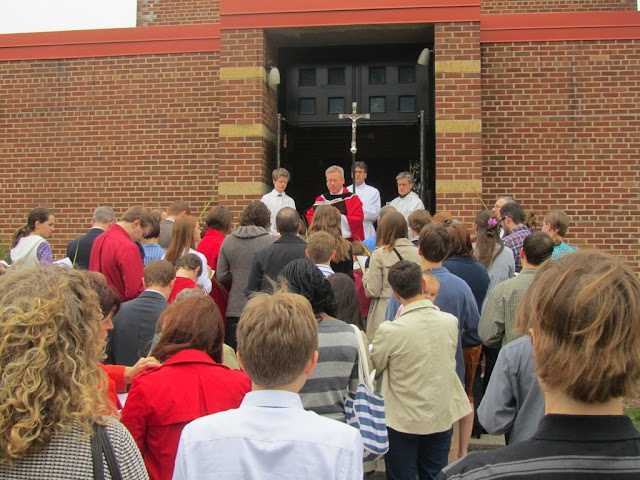 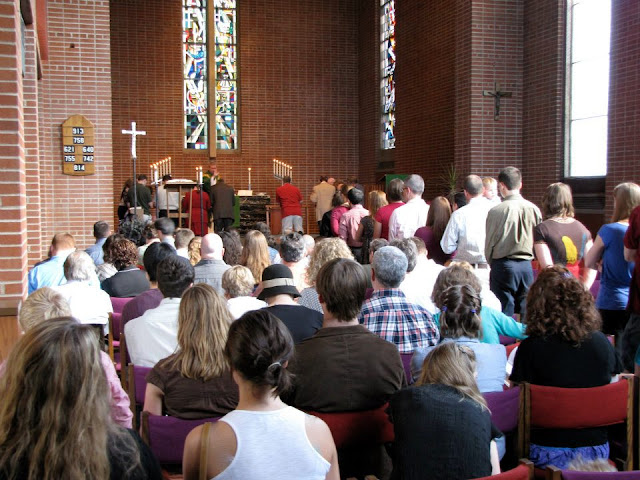 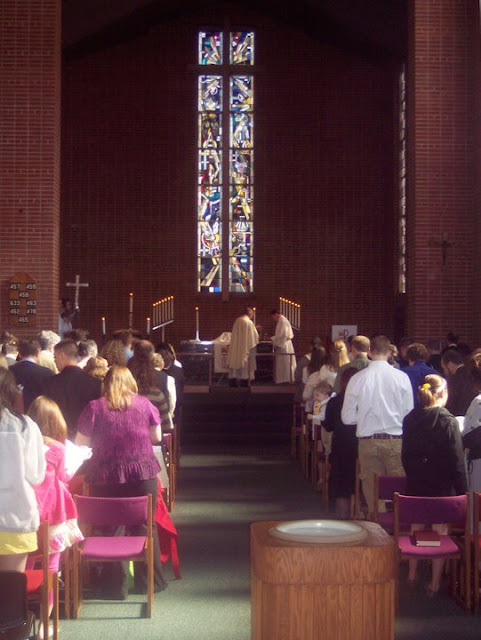 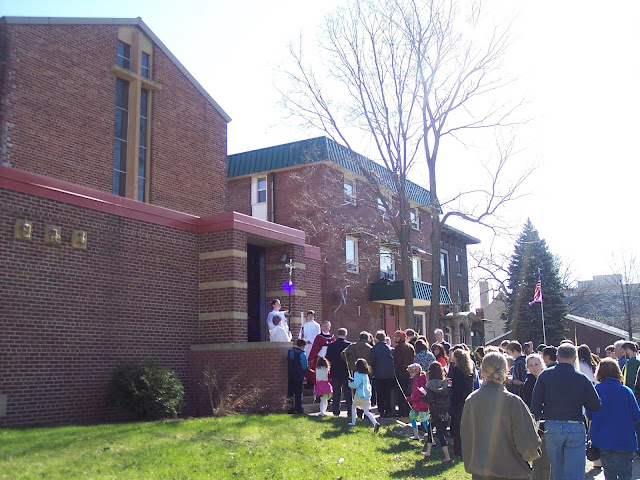 The finger-snapping thing reminds of a story about a Scottish man attending a U2 concert...

Bono stopped the show mid-concert and stood alone on the stage, snapping his fingers in a very slow, silent rhythm. 'Each time I snap my fingers, an African child dies of starvation.' The crowd was deathly silent, except for the snap...snap...snap...snap. Before he could go any further with the guilt-trip he was about to give the crowd, a loud (and possibly drunk) Scottish voice was heard above the rest of the crowd, yelling, 'Then you should bloody well stop snapping!'

I wonder what would happen if something like that were to happen during such a sermon...:-)