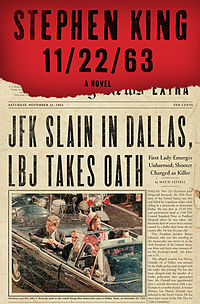 Our Peace Book Club met tonight to discuss our latest book, Stephen King's "11/22/63." It had been years since I read something by King, so I was glad to take him up again, although this offering from him was much different from the suspense-filled and horror-drenched books I've read in the past. Different, but good. There is plenty of suspense and many twists and turns, but it's more historical fiction than anything else.

11/22/63 is the date of Kennedy's assassination, of course, and King suggests in this book that this was a pivotal, world-changing event, and leads the reader to wonder what the world would be like had Kennedy lived. The main character in the book, Jake Epping, an English high school teacher living in 2011, is introduced to a rabbit hole by his friend, Al, an eccentric cook, which leads back to 1958. His friend stumbled onto this rabbit hole and had been using it for years to go back in time and explore, and to purchase hamburger at a ridiculously cheap price to bring back and offer cheap burgers at his diner. Over the years, it occurred to Al that maybe the rabbit hole could be used to change history, and eventually he arrives at the belief that changing what happened on 11/22/63 would change the world for the better in a drastic way. He sets out to do this himself, but becomes deathly ill with lung cancer and cannot complete his mission to stop Oswald's dirty deed, which is why he turns to his friend, Jake.

When you go through the rabbit hole and enter 1958, no matter how long you stay there, only two minutes have elapsed in 2011 time. And, each time you go back through the rabbit hole, a complete reset occurs, so that anything you've changed from a previous visit is undone. Jake goes through a few times and makes some changes to test things out before deciding to take up his dying friend's request to stay in the Land of Ago for the five years it will take to a) determine for sure if Oswald had acted alone to assassinate Kennedy, and b) to stop that from happening.

And, that's all I'm gonna tell you. :) If you want the rest of the story, you'll have to read the book, which is no easy undertaking, weighing in at nearly 850 pages. Our Peace Book Club gave everyone two months to complete it, and most of our members did so. What I will say is that this book offers much to ponder in the way of ethical dilemmas. If you knew that someone was going to do something evil and stopping that evil from occurring required you to commit evil yourself, would you do it? If you met the love of your life, would you be willing to let the world go to hell to be with her, or would you save the world and let her go? Is it okay, and even honorable, to lie and deceive in order to accomplish a greater good? Lots of stuff like that comes to the surface throughout the book.

I purposely stayed away from reading any reviews of the book before we met tonight, as I wanted to hear what our group thought of it and share what I thought of it before doing so. So, we had our discussion and we were really all on the same page. Everyone enjoyed the book very much, but the one criticism we all had was that it was about 300-400 pages too long, as King spent way too much time telling us about the movements of Oswald, his family, and his associates. Interestingly, after we had our discussion, we all read several reviews together and this was the same criticism shared by many - great book, but too much time on the reconnaissance of Oswald and company. It is obvious that King did TONS of research into Oswald's life in the years and months leading up to 11/22/63. It is also obvious that he didn't want a smidgen of that research to go to waste, as he spends over 300 pages having us follow Oswald around. For the first half of the book, it's a real page-turner, but when he gets to the Oswald reconnaissance part, it stalls. But, then, it picks back up again and ends in page-turning fashion.

Even so, it was well worth the read and I'd readily recommend this book. Our group always gives the books we read a rating between 1-5, and this one, after rounding up, received a 4. It really was a fun and thought-provoking read and King's talent enables the reader to get through the mundane section mentioned above relatively unscathed.

We decided that the book we'll read this month is the latest John Grisham offering, "The Litigators." Always fun to read Grisham; looking forward to it. 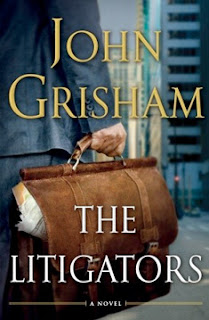